Ok - I know I said I wasn't sure I knew what  this blog was going to be about but I am just warning you that it is unlikely to have an ongoing theme of heavy metal.  However this post will!

On Friday night my husband and I were fortunate enough to be given free tickets to Metallica.  While I wouldn't class myself as a huge fan I did know some of their music having been a teenager in the late eighties/early nineties.  I can remember my house choir singing "Nothing Else Matters" when I was at an all girls high school!   Interestingly when I mentioned I was going to my closest friends their immediate response was to a. laugh and then b. ask what I was going to wear. 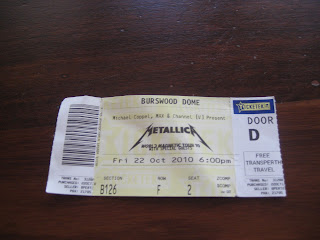 So in the spirit of Being Prepared I downloaded Metallica's black album onto my ipod for familiarisation purposes and planned my outfit.  By Friday night I was ready.  I wore jeans (black), t-shirt, (black), jacket (denim) and boots (tough looking).  I also had two pairs of industrial strength ear plugs in my jacket pocket just in case.

From the minute we got to the Burswood Dome I loved the whole experience.  The people watching was fantastic.  Metallica have a huge and varied fan base.  From the stereotypical bogan to pregnant women to young children to people in suits and ties.

We missed the first support act but arrived in time to see Lamb of God, who are apparently very popular but I have to admit were a little bit heavy for my taste.  They did seem to excite the crowd though, which I guess is the aim of a support act.  According to my husband they were technically excellent.  One gentleman in our section got so involved in his headbanging to Lamb of God that he had to retire to the First Aid post and get an ice pack for his neck.  The poor man could then hardly move for the Metallica show.  It was the classic case of "going too hard, too early".

When Metallica hit the stage the atmosphere was explosive.  Not least because the Metallica show involved exploding fire balls! They also had huge dangling metal coffins that moved over the band and the crowd.   I was fully prepared to enjoy the show as a spectacle but was unprepared for how much I would love the music.  The band was amazing. They have been together for almost thirty years and it showed.  In a good way.  They were professional, hugely enthusiastic and absolutely fantastic.  Guitar solos, drum solos, vocals - I loved the lot.  They played songs from their new album "Death Magnetic" and lots of their old songs.  "Master of Puppets", "Enter Sandman" and "Nothing Else Matters" were  the crowd favorites.   Even I was on my feet singing and dancing whilst my husband played some energetic (and I am sure technically excellent) air drums! Image from deep schism via flickr
I very stupidly forgot my camera ( am obviously a fledgling blogger) so borrowed this image - I promise it was exactly like it though!
Overall I would love to see Metallica again.  What can I say?  Metallica you ROCKED, in every sense of the word.  And I never used the ear plugs.
Posted by A Farmer's Wife at 9:13 AM

I remember that inter-house singing competition, Nothing Else Matters was a real highlight that year.
I am so impressed that you managed to get to the concert, the closest I have been in recent years is to sit in my backyard and listen to bands at Subi oval, approx 1km away. Guns'N'Roses are coming in December, oh joy!

Hi Shannon - sitting in your own backyard, drinking a glass of wine and listening to live music sounds like heaven to me...

Life In A Pink Fibro said...

Love it! Particularly the man who suffered a bad case of 'going too hard too early'...

Well this first post is super exciting! Heavy metal, injuries and fire - wow. Last time I went to the Burswood Dome I saw Justin Timberlake. A bit embarrassing but it was fun!

well, who doesn't like a bit of metal now and again?

Did this group come after Buddy Holly and the Crickets?

I saw Metallica years ago when I was young (early 1990's). Reading your blog brought back some memories. Great first blog! x

Not my cup of tea but rather pleased it was yours. My Hubby interviewed them once on the radio. He said they were really good, very nice bunch :)

I'm much more Barbara Streisand - how we ever got together is beyond me!!

What a fantastic experience. I love that the people watching was your fave part - I would be right there with you. Actually, that would be my sole reason for being there as I can't say I'm a fan of the music. But it would be worth it! x

I love Metallica's Black album but you are far braver than me tackling a concert! Did you have tinnitus for ever more? x

Rock on! Metallica's Black Album is fantastic. Haven't seen them live but sounds like they were pretty damn cool. I love a bit of rock/metal, my fav? GNR (the orginial, not since Axl went even more cooky)

That sounds like so much fun. I have never been into heavy metal much but I do like that song "Nothing Else Matters". What great first post :)

This is awesome. I especially love when you're describing what you were wearing and ending with boots (tough looking) ! stopped by from weekend rewind. x

Rewinding the weekend has been lovely. I'm loving the contrast of the beautiful decor of your blog, and Metallica! Thanks for joining in the Rewind and bringing me to your blog.