In The Kitchen With The Pioneer Woman - Ree Drummond

Ree Drummond is an American rancher's wife who has a mega blog.  She is known as The Pioneer Woman and is one of the most successful bloggers in the US. She was very much an urban creature until she married "Marlboro Man" who is her stunning specimen of a cowboy husband. He wears chaps.  A lot.  Ree has just published a cookbook.  Earlier this week I decided to grab her cookbook and see just how well her Oklahoma rancher's wife recipes would  go in my Western Australian farm kitchen.

She is pretty honest about the fact that her recipes aren't gourmet and the book is really devoted to home cooking.  Suits me.  I also love the fact that she has taken all her own photos in her own kitchen.  I particularly like the section where she has taken photos of things going wrong and the kitchen looking a mess.

She has a strong liking for butter and I must admit to baulking at this a little. Often the butter was measured in cups!  I can, however, understand completely the point she makes about cooking higher calorie food because everyone in her family works physically hard.  If you were an office worker though I would have a serious rethink about some of the recipes... The other great thing about Ree is the fact that her husband wears chaps.

All of her recipes contain everyday ingredients which I did really like.  I struggle with Gourmet Traveller and the like as that sort of stuff is just not available at our local, small town IGA.  The layout of the cookbook is very practical and Ree comes across as very down to earth and likeable. And has a husband that wears chaps.

Interspersed with her recipes are lots of photos of their gorgeous ranch, her family and her hunky husband wearing chaps!  The chaps are a high point....

Anyway, I digress.  I grabbed her book and decided that the Comfort Meatballs looked like just the ticket.  The ingredients were basic, the process was simple and the recipe looked like it would produce the sort of meal that everyone would eat.  As I have said before, that's all I am aiming for by dinnertime in my kitchen. (Oh how the gourmet has fallen...)  I must admit to thinking I probably didn't need a recipe but followed it exactly anyway - which I am really glad about.

I made the meatballs with the quick porridge oats and made the topping, complete with bottled tomato sauce.  It was super easy.

I popped the whole lot in the oven and it came out looking like this. 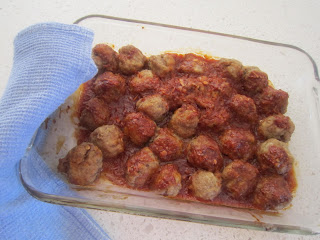 It looked average but everyone ate it.  And loved it.  There was a fight between The Farmer, Farmboy and myself for the last meatball.  They were like tiny, yummy, round meatloaves.  It is definitely a recipe that is going to go on high rotation in our kitchen.  And not just because the cookbook has lots of pictures of cowboys wearing chaps.

Now, after careful reading of her book my next challenge is going to be her famous cinnamon scrolls.  I just need to get my head around the fact that the filling involves two cups of melted butter.  And locate maple essence in Australia. I'm presuming I can't just use maple syrup or Ree would have said so - her instructions are very clear.   If any readers from US or Canada have any ideas, let me know....

By the way, did I mention the fact that Ree's husband wears chaps?
Posted by A Farmer's Wife at 12:51 PM

Your resident American and baker here advising you to not use 2 cups of butter! If Ree's recipe is like my own Sticky Bun recipe, you do need to knead butter into the dough. But if there is too much (anything over 150g) then you risk having a soggy lump of dough that does not rise. It won't hurt the recipe to have less butter. Also, be sure to rest the dough in the fridge or it will be unworkable. Takes longer but is worth it.
As for the maple essence, never heard of it. If she uses it to drizzle over dough before rolling into scrolls, using good old maple syrup would be no different to honey (the sticky in the Sticky Buns).
I wish my husband wore chaps....

The melted butter gets poured over the dough and then it gets sprinkled with sugar and cinnamon before you roll them up.

Agree that it is a real shame there is no reason for chap wearing on Australian cropping farms.

Say no to maple essence. Maple syrup is the real thing, not cheap but worth the money.

That book sounds great, but I'm with you on the butter thing.

The maple essence is used to flavour the icing so I am worried about making it to sticky. I think I may just go with vanilla essence. Here is the link to the recipe if anyone wants a peak. It does look very yummy.